A set of substitution rules constructed by generalisation of the Conway-Radin Pinwheel, by L. Sadun. The details of these rules can be found in [Sad98] .

This substitution tiling is the example of substitution tilings with infinite rotations. Its statistical and dynamical properties were studied in several papers by C. Radin, see for instance [Rad92] , [Rad97] . In particular, it was shown that the orientations of triangles in the pinwheel tiling are equally distributed in the circle. Despite the occurrance of irrational edge lengths and incommensurate angles, all vertices of the pinwheel tiling have rational coordinates. 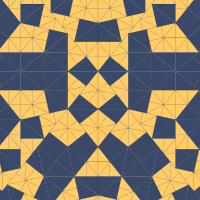 One member of an infinite series of tilings generated by a more general construction than a tile-substitution, [Sad98]. In particular, Sadun’s construction yields tilings with infinitely many prototiles, as well as with finitely many prototiles. Each tiling in this series is described by two positive integer parameters. This one, with parameter 1⁄2, is one of the ‘simplest’, in the sense that there are only two prototiles. THE simplest in the series is the one with parameter 1, which is the well known pinwheel tiling.